Adventure and dream in every moment !

In a wide variety of activities for all levels, ADVENTURE LAND offers unique scenic courses where climbing walls meet at their summit the Yeti, where aerial courses are a universe of flying dragons, and where underground trails reveal the hidden treasures of gnomes.

It is not only an experience of self-control and physical strength, it is also an adventure in the imagination of all heroes who embark on a surpassing of themselves.

ADVENTURE LAND brings a revolution in the way that sports such as sliding or climbing are practiced. It is imagination in combination with physical strength, for an experience to be shared with family or friends.

CLIMBING WALL
ADVENTURE LAND offers several climbing courses of varying complexities, but it is the theme which truly differentiates each course. The surfaces, imitating actual rocks, integrate scenic elements that bring a touch of life to the walls.
Encounters with robots that arise intermittently, representing imaginary characters, are some of the special effects that give a genuine touch to a climb full of surprises. Far from inert, our climbing walls are alive and interact with the climber.
The climbing is easy -- but beware the distractions.

ROPES COURSE
At ADVENTURE LAND, our aerial course rope is anything but traditional. It is the encounter of a physical race on ropes with the mastery of vertigo, associated with a thematization of another world. The set of special effects deceives the senses, accentuating the disorientation and forcing mastery over oneself.
As a result, decorative elements to which bridges of rope are hung seem to float in the air, with an immense projection on the ground giving the illusion of enormous height.
Robot dragons installed around the circuit complete the ambiance.
Running on a track in the sky is now a reality. Reaching the stars is no longer a dream; it’s possible....you just have to do it.

CAVE TRAIL
Spelunking in ADVENTURE LAND means discovering an underground world full of mystery and wonder. Our route reproduces a combination of traditional passages in underground crossings with unique settings.
The itinerary requires you to crawl, climb and descend in crevices to arrive in rooms full of stalactites and stalagmites, to discover drawings on the walls left by the first men and to contemplate the remains of a civilization now gone: the one of Gnomes ... but have they truly disappeared? From this deep, dark infinity strange noises arise, and you discover treasures recently discarded ... a mystery that you must solve in the depths of the abyss, by only the light of your torch helmet.

ICE RINK
ADVENTURE LAND has an winter-themed attraction for those who enjoy ice skating.
We provide an ice rink with animatronics (robots) and prehistoric ambiance. It’s part educational, part amusement for the family. Our ice rink is inside a themed area with fake rocks and glaciers. Mammoths, saber-toothed cats and more surround the rink and are motion-sensitive. Some dinosaurs are trapped in the ice…be careful if they wake up.

TWIST THE PERSPECTIVE
ADVENTURE LAND brings to life an illusion from the past: the tilt house. The outside of this attraction appears ordinary, while on the inside, the laws of gravity seem to go awry as soon as the unsuspecting visitor steps in.
Everything goes wrong: we have difficulty walking down a corridor, a water fountain flows in a way that doesn’t following the normal laws of gravity, our perception is distorted by false perspectives...it’s hilarious to be in situation where our senses are confused by physical tricks...recreation, but also science. 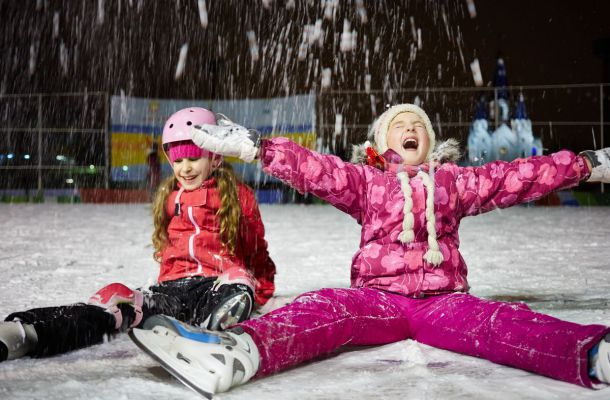